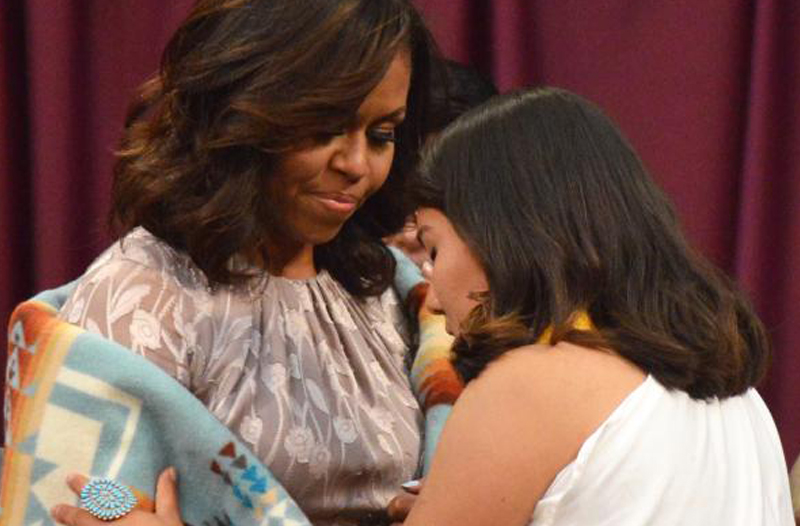 “As we all know, this school was founded as part of a deliberate, systemic effort to extinguish your culture; to literally annihilate who you were and what you believed in. But look at you today. The Native languages that were once strictly forbidden here now echo through hallways and in your dorm room conversations at night. The traditions that this school was designed to destroy are now expressed in every square foot of this building…And the endless military drills and manual labor that those early students endured have been replaced by one of the best academic curriculums in the country.”

The National Native American Boarding School Healing Coalition (NABS) would like to take this opportunity to express its appreciation to Mrs. Obama for, at long last, recognizing publicly a critical part of American history that continues to have negative impacts on a significant and important sector of our country today. It is only by bringing this history into the full light that we can all, collectively as Americans, begin to heal the harms that continue to be felt today. By using her position of prominence, the First Lady took a crucial first step towards healing. “We are so thankful for her care and courage. Now, it is upon the rest of us to take the next steps, each in our own sphere of influence and relying on our own expertise and experience” said Elicia Goodsoldier (Dine’/Spirit Lake Dakota) member of the Board of Directors for NABS.

NABS was formed in 2012 under the laws of the Navajo Nation. NABS, like the First Lady, recognizes the importance of increased education and awareness of the United States’ role in implementation of a federal Indian Boarding School policy and program. The US policy was a model for Canada and Australia’s aboriginal residential school policies as well. Those countries have acknowledged their harmful policies and actions and have apologized to the indigenous people, taking responsibility for the impacts the schools have had on culture and language.

Through its Truth and Reconciliation Commission, Canada is the most recent to denounce the policies that were designed to “Kill all that is Indian” in its students in order to “Save the man.” The goal, stated differently, was one of killing of the native tribal cultures of this land–cultural genocide. This policy, and how it was carried out, caused much harm. Until now, the truth has largely been swept under the rug and ignored by the public and in textbooks about US history. But the impacts and intergenerational trauma have only continued to fester and compound in certain communities. By bringing the harms of the past and their continued effects out into the light, we can begin to create healing for all who were involved.

In 2008, the National Congress of American Indians passed a resolution calling for Presidential acknowledgement and apology for the abuses which took place at Indian Boarding Schools. In 2009, as part of defense spending appropriations bill, a measure was included urging the President “to officially apologize for the past ill-conceived policies by the US government toward the Native peoples of this land and re-affirm our commitment toward healing our nation’s wounds and working toward establishing better relationships rooted in reconciliation.”

The bill passed and President Obama signed it; however, it was modified to read as an apology “on behalf of the people of the United States to all Native peoples for the many instances of violence, maltreatment, and neglect inflicted on Native peoples by citizens of the United States.” Many people, including small independent media sources, questioned whether this was a true apology if the White House did not publicize it and no one in particular received it.

NABS applauds Michelle Obama’s heartfelt acknowledgment of Sante Fe Indian School’s history in her commencement speech. We encourage further education and acceptance of responsibility at a public policy level. Now, at the urging of our Coalition membership and tribal leaders, NABS is calling for an official proclamation from President Obama on the harmful and lasting effects of the US Boarding School Policy and experience.

The statement we will request from the President before he leaves office should specifically acknowledge the ongoing legacy of inter-generational trauma, cultural destruction, language loss and social and family upheaval caused by the US Boarding School Policy. We will call on the US Government to take definitive steps to address and heal these open wounds, working in collaboration with American Indian and Alaska Native Tribal Nations, communities, and families.

Please participate in our survey which seeks to gather the requests and recommendations of our Coalition Members, Tribal Leaders, Community Members, and Allies in order to draft our request for a statement from the President about Boarding Schools in the US. Please share this survey with others. Thank you.

For more information on how you can support this initiative and the National Native American Boarding School Healing Coalition, please email us at info@nabshc.org.

[1] The Santa Fe Indian School opened in 1890 to educate Native American children throughout the Southwest. This school was established by the federal government during the Boarding School era with a charge to assimilate Native children by prohibiting them from speaking their languages and practicing their traditional and spiritual beliefs. The state of New Mexico had two federal boarding schools—the other in Albuquerque, NM.

Membership is free for individuals. Become a member today.